On this occasion, the students had the opportunity to find out a series of information about this holiday from those with whom they spoke and about the products prepared by the locals from Slătinioara and Livezeni from Mr. Filimon Vreja. They attended the official service at the Trinity in the “Căsuţa din Poveşti” meadow, “raised by those who love Parangul, for all those who lived loving Parang and Valea Jiului”, the place where locals and tourists meet every year on Saint Mary. They also watched the show held by “Doina Muntilor Parâng” Folk Group, coordinated by Mr. Tiberiu Coconeț.

The students who participated in this activity together with Mrs. Stefania Manea, coordinator of the project, and Mr. Rolland Szedlacsek, IT engineer.

At the end of the activity, the students who participated were given some tasks to carry out. A group of 3 students had to write and translate a text about pastoral festivals. A student had to make a Power Point Presentation about pastoral festivals and refer to the ones they have attended to give their partners the chance to see what they represent. This presentation was uploaded on the Twinspace.

Other 3 students had to create a video entitled: “Reasons to attend pastoral festivals in the Jiu Valley”. They used the data collected at Straja and Parang. Through this video, they want to attract more tourists in this area and promote the local customs and traditions. The video was published on Twinspace. (https://twinspace.etwinning.net/77604/pages/page/484367/edit)

We asked Mr. Grunta some questions, such as the time when he started creating these staves or who taught him how to create them. We were amazed by the way he answered the questions, because he is a person who contributed a lot to our legacy, knowing there is no one else to keep on creating the “boate” anymore after his inevitable death. This tradition used to be transmitted from father to son, but unfortunately, his son wasn’t that interested in this to continue the family business.

However, we’ve learnt that creating those handmade staves requires a day’s time in order to finish the entire design, and their price is really accessible.

To conclude, it’s quite sad that he’s the end of a saga full of culture and history, and I really hope there will be somebody to take his place in the future.

The aim of the activity was to collect data about traditional occupations in the Jiu Valley that were a source of income for the local people. The activity was disseminated on the Facebook group and on Twinspace.

The students made a PowerPoint Presentation about wood carving in the Jiu Valley which can be found on Twinspace(https://twinspace.etwinning.net/77604/pages/page/671176) 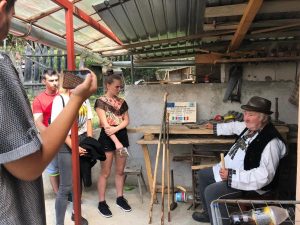 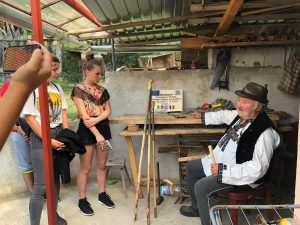 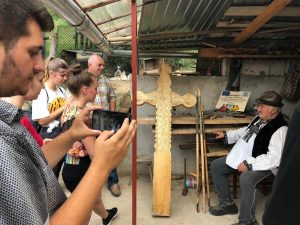 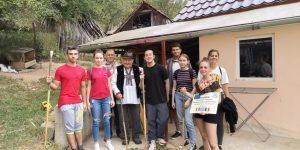 This is the description of the activity posted on the Facebook group page (https://www.facebook.com/groups/841958769470806/?ref=bookmarks) and on Twinspace:

On 28th August 2019, three students from “Mihai Eminescu” National College together with Mrs. Stefania Manea, coordinator of the Erasmus+ Project “Promotion Of Identity, European Culture and Tradition” (ref. no. 2018-1-IT02-KA229-047925_3) and Mr. Roland Szedlacsek, decided to go on a trip to Peștera Bolii (Bolii Cave) to prepare the activity that will take place at Banita Fortress during C3 activity: “Local cultural heritage in a European perspective and the Romanian National Day”. On the official website of the National Centre for Information and Tourist Promotion in Petrosani Municipality (NCITP), it is mentioned that the fortress is spectacular. When we arrived, we were pretty disappointed. The fortress was on top of a hill and it was quite dangerous to get there. Gladly, Mr. Szedlacsek brought his drone to take some pictures and videos of the fortress and of the view. To get a better look, we decided to go on a hike on the opposite hill. The trip did not go as expected because we did not see the actual fortress because of the vegetation, but I can say that we had a really good time.

Then, the students made a film with this citadel that will be presented during the C3 activity. 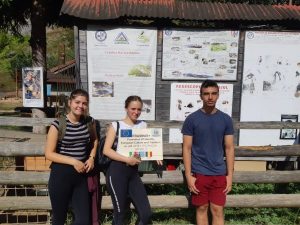 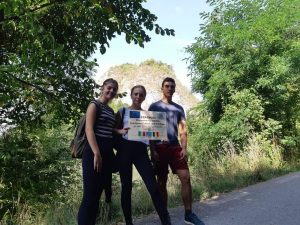