On July 26, 2019, the pupils of the Erasmus+ project of our school and Ms. Maria Mangana attended the musical theater performance “Erotokritos” by Vitsenztos Kornaros. The performance was held by the Theater Group of the Friends of the Sitia Music Association and the Sitia Municipal Philharmonic Orchestra at the Municipal Garden Theater in Thessaloniki.

This masterpiece combines the Greek and Western literary tradition and highlights the unique cultural identity of Crete. Erotokritos marks an entire era for the Greek musical tradition, greatly defining the linguistic idiom of Crete. It praises love, friendship, virtue, bravery. It highlights the ideals of all the Greeks who are still identified with the characters of the play. 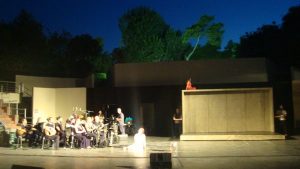 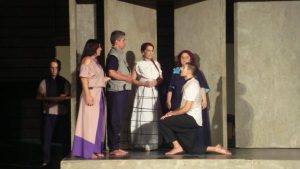 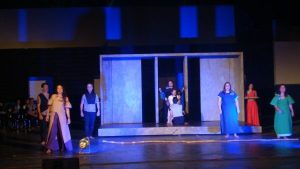 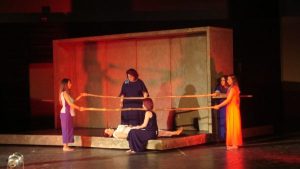 “Erotokritos” is characterized as a narrative poem or a romance novel. The verses (over 10,000) recount the phases of the love of two young men, Erotokritos and Aretousa, until they get married. The story highlights the virtues of honour, friendship, bravery and courage.

Vitsenztos Kornaros, as a poet of the Renaissance and as a Greek, chooses ancient Athens as the place of action, but the world displayed is a complex construct which does not correspond to any particular historical period. Alongside references to classical Greece, there are anachronisms and many elements from Western Europe, such as the jousting competition. The poet is divided in the following five parts:

I. After several years of marriage, a daughter (Aretousa) is born to the King of Athens (Heracles) and his wife. The son of the faithful adviser to the king (Erotokritos) falls in love with the princess. Because he cannot reveal his love, he sings under her window in the evenings. The girl gradually falls in love with the unknown singer. Heracles, when he learns about the singer, organizes an ambush to arrest him, but Erotokritos with his beloved friend kills the soldiers of the king. Erotokritos, realising that his love cannot have a happy ending travels to Chalkida to forget. During his absence, his father falls ill and when Aretousa visits him, she finds in the room of Erotokritos a painting of hers and the lyrics he sang. When he returns, he discovers the absence of his drawing and songs and learns that the only person that visited them was Aretousa. Realizing that his identity was revealed and that he may be at risk, he stays at home pretending to be ill. Aretousa sends him a basket of apples to wish him well and as an indication she shares his feelings.

II. The king organizes a jousting competition for the entertainment of his daughter. Many noblemen from around the known world participate and Erotokritos is the winner.

III. The couple begins to secretly meet under the window of Aretousa. The girl pleads with Erotokritos to ask her father to allow them to marry. Naturally, the king is angry with the audacity of the young man and has him exiled. Simultaneously a marriage proposal for Arethusa arrives by the king of Byzantium. The girl immediately gets engaged secretly to Erotokritos before he leaves the city.

IV. Aretousa refuses to consider any marriage proposals and is imprisoned by the king alongside her faithful nanny. After three years, when the Vlachs besiege Athens, Erotokritos reappears, his true identity concealed through magic. In a battle he saves the life of the king and gets wounded in the process.

V. In order to thank the wounded stranger the king offers him his daughter as spouse. Aretousa refuses to accept this marriage and in discussion with the disguised Erotokritos she persists in her refusal. Erotokritos submits her to tests to confirm her faith and finally reveals himself after breaking the spell that concealed his identity. The king accepts the marriage and reconciles with Erotokritos and his father, and Erotokritos ascends to the throne of Athens.

The direct model of the work is the French popular medieval romance “Paris et Vienne” written by Pierre de la Cépède, which was printed in 1487 and was widely circulated, having been translated to many European languages. Kornaros most likely became familiar with the French original through the Italian translation, since he was unlikely to understand French. He adapted the original creatively and his adaptation displays some merits compared to both the original and other adaptations. The plot is better structured, the characters fewer, some repetitions are reduced and there is more emphasis on the development of the psychology of the heroes. The first part of the work follows the original. The two works differ significantly after the failed marriage proposal.

The work “Erotokritos” was very popular and circulated in manuscript form throughout the 17th century. In 1713 it was printed in Venice by some Cretan who had collected several manuscripts of the work.

Four centuries after “Erotokritos” was written, it is still up to date. Erotokritos praises the virtues of true love, friendship, courage and patriotism, and this is the reason for its later popularity all over Greece. It was a source of inspiration for Dionysios Solomos and influenced Greek poets as diverse as Kostis Palamas, Kostas Krystallis, and George Seferis. A complete translation to English was made by Theodore Stephanides in verse, and by Betts, Gauntlett and Spilias in prose. Several groups of renowned Cretan musicians have added selected parts of the poem to their music, often exploring the boundaries of their local musical tradition.

A work that blends Italian and Western culture in harmony with Byzantine standards and Cretan folk tradition giving rich cultural and spiritual crops. We all enjoyed this remarkable transfer of the work of the Cretan Renaissance by the theater group of the Friends of the Sitia Music Association and the Philharmonic Orchestra of Sitia Municipality , which is also the birthplace of Vitsenztos Kornaros.