On 17 October 2019, on the occasion of the exhibition “The splendour of Mosaics: Originals and Replicas from Thessaloniki and Ravenna”, the pupils of the Erasmus+ project of our school (B Class) and the teachers Mrs.Maria Mangana, Mrs.Dimitra Ntomprou, and Mr.Evangelos Tzanidis visited the exhibition of the mosaics at Rotunda monument of Thessaloniki. This educational visit aimed at studying the local artistic heritage of Rotunda Thessaloniki for the P18.1 Activity (study local artistic heritage). 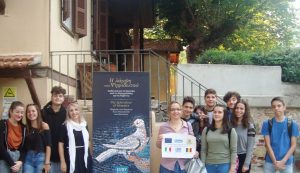 The emblematic monument of Thessaloniki was constructed in the early 4th century AD, on the turning point between the pagan with the Christian world, probably as a temple for ancient cult worship or as a mausoleum for Constantine the Great (306-337AD). This circular, domed building measures 29,80m in height, 24,50m in diameter, its walls are 6,30m thick and can only be compared architecturally to the Pantheon in Rome. It was erected north of the Arch of Galerius, with which it was linked by a processional road. Not long after it was built and during the early years of the long-lived Byzantine Empire (330-1453AD), the Rotunda was turned into a Christian church with the addition of a sanctuary on its eastern side. The interior was decorated with Early Byzantine (4th – 6th centuary AD) wall mosaics of unique artistry and beauty. According to Byzantine texts, the church was dedicated to the Archangels. It was Thessaloniki’s cathedral church (metropolis) between 1524 and 1591, the year in which it was converted to a mosque by the οttoman conquerors. It remained in use as a mosque until the city’s liberation in 1912. Its dedication since that time to Saint George (Agios Georgios) is owing to the small neighboring church of this name.

Ravenna was the seat of the Byzantine Exarchate during the reign of Maurice, after the Ostrogoths defeat by the Byzantine Emperor Justinian I in 540AD. The magnificent churches of San Vitale and Saint Apolline in Classe date back to the Byzantine Rule. Ravenna preserves to this day many of its medieval monuments and famous mosaics that have endowed the city with special prestige.

The pupils of the Erasmus+ project of our school prepared a relative presentation of their visit. You can find the presentation at: 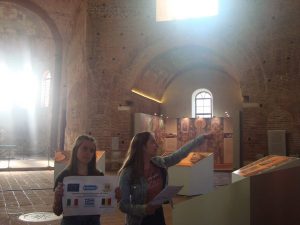 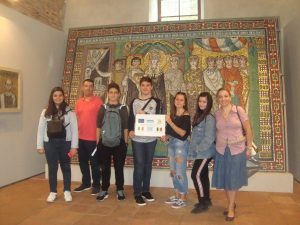 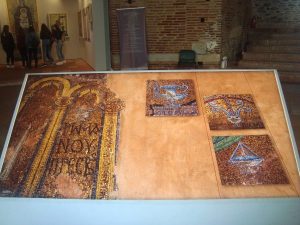 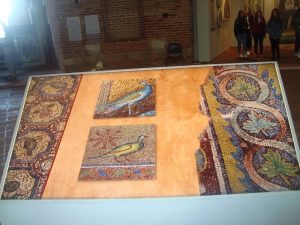 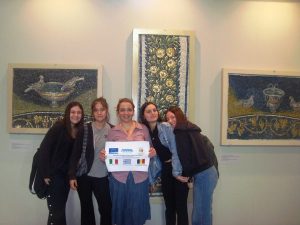 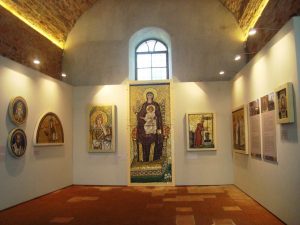 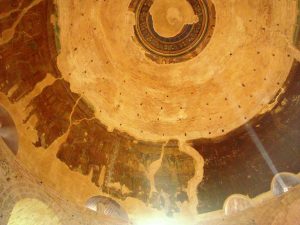 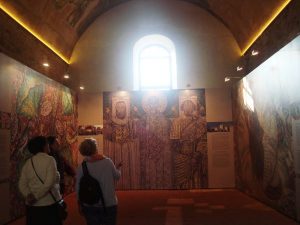 On 23 December 2019, the pupils and teachers of our school watched at Olympion Cinema Thessaloniki the documentary “The Great Fire of Salonica in 1917: Birth of a City”, an archives-based documentary narrating the experiences of Thessaloniki’s residents during the biggest and most destructive fire in the history of the city.

This documentary was suggested by a group of students of the Erasmus project who have already watched it on 11 November 2018 at the Town Hall of Pilea-Hortiatis during the first presentation of the film in our municipality. 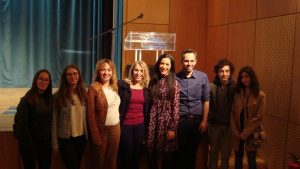 The Erasmus+ group of our school with the director and the music composer of the documentary “The Great Fire of Salonica in 1917: Birth of a City”

After watching the documentary, Ioannis Katsenis, pupil of B Class, interviewed the director of the documentary Grigoris Vardarinos, searching for local artistic and economic opportunities in the field of historical documentaries.

Question: What did you study to be a director and what is your work as a director?

Answer: I graduated from the Film and TV Studies Department of the New York University. I also have a master’s degree in Film Directing from the University Of Edinburgh School Of Fine Arts, where I studied on a scholarship from the Onassis Foundation.

I have directed award-winning documentaries and short films in collaboration with ERT (the National Channel), the OTE HISTORY channel and the Hellenic Cinema Center.

Question: What was the trigger that prompted you to turn to the field of historical documentaries and to the documentary about the fire in Thessaloniki in 1917?

While researching with my collaborators on the history of Thessaloniki, we came across the album of Aleka Gerolympou “THE TIME OF THE GREAT FIRE Thessaloniki August 1917”. The testimonies about the fire were so brilliant that it immediately caught our attention and we appreciated the potential that existed to tell an interesting story to the public.

It was a happy occasion that the 100th anniversary of this significant event was approaching. We felt that it would be a good opportunity to finance the documentary as there was the motivation of the topicality of the issue, which is unknown to the general public, especially outside Thessaloniki.

The search for the documentary lasted several months. Together with the screenwriter Anastasia Bartzoulianou, we had to spend many hours in university and municipal libraries, in the archives of Thessaloniki, as well as in the digital archive of the newspapers of the Library of the Greek Parliament to collect the material. Through our research, we have identified the most trained scientists on the subject, such as the Professor Aleka Karadimou-Gerolympou, who, in addition to her academic research on the subject of the fire of Thessaloniki in 1917, has published dozens of studies, essays and books.

The final result of the documentary on the History of the fire of 1917 in Thessaloniki, lasting 62 minutes, was the result of a team work with the journalist-screenwriter Anastasia Bartzoulianou, the author Philipos Mandilaras, the documentary moderator Giannis Karabelas, the music composer Dimitra Sideridou, the narrator (actor) Dimitris Tsilinikos and the photography director Dimitris Stampolis.

Question: Do you think that you had the appropriate state support or European funding?

Answer: Unfortunately, in Greece there is not enough state support for such creations and all the help comes from sponsorships mainly by individuals that emerges after a constant search.

Question: Was this documentary shown outside Greek borders? If so, what was the response?

P18.3. Watching the theatrical play “A fairytale for two”

On 28 January 2020, the pupils of the Erasmus+ project of our school (B and C Class) attended the theatrical play “A fairytale for two”, a new production of the Youth Stage of the National Theatre of Northern Greece at the Theater of the Monastery of Lazarists. The play was written by the British author Philip Ridley, translated by Xenia Kalogeropoulou and directed by Alexandros Raptis. 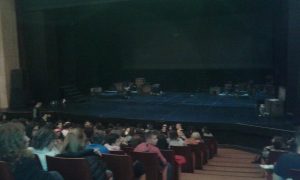 Two teenagers, Kevin and Sandra, meet on the stage of an amateur theater in an abandoned cultural space. Against the backdrop of a painted landscape, the two young men try to escape from the reality they live in, to be transferred to “elsewhere” and from there to look at life again in a different way. In the cold room, they open their hearts, tell their stories and find that “four eyes see better than two.”

Meropi Kougioumtzoglou, pupil of B class wrote about the play: “The show has many strong points but also some weaknesses. Initially, the performance of the protagonist Pericles Siountis was excellent, as he managed to show the character of a 15-year-old teenager who, despite the family difficulties he experiences, maintains his energy and creativity, absolutely realistically and with unpretentious speech. I was not satisfied with the interpretation of the girl, because she lacked naturalness and spontaneity. This fact downgraded the entire show, as long as it relied almost entirely on the abilities of the two actors.

The main disadvantage of the play was the repetitive elements, as far as the script is concerned, and the blurred structure. For example, the idea of ​​creating a play with a strong fairy tale element by the two young people was apt, but it was used too many times during the play. The choreography did not impress me very much, as I think they needed improvement.

With the help of music and new media (animation, video wall) the work took on a modern and original character and found a point of contact with the young audience. However, I would like to note that in his attempt to attract the young audience, he used stereotypical perceptions of the youth and its difficulties, aiming to impress”.

P18.4. Sharing with students, teachers, parents and local community of the experience of the C3 mobility in Romania

Press release about the C3 short term exchange of groups pupils at the website of the Municipality of Pilea Hortiatis: https://www.pilea-hortiatis.gr/web/guest/home?p_p_id=bs_news&p_p_action=1&p_p_state=maximized&p_p_mode=view&_bs_news_struts_action=%2Fext%2Fnews%2Fload&_bs_news_mainid=40267&_bs_news_loadaction=view

In January 2020 the pupils of B Class that would participate in the C1 Activity “Knowledge and sharing of local Italian cultural heritage, with particular attention on local feast of S.Joseph” for the period 7 to 14 March 2020 rehearsed on the traditional Greek dances that they would present during the welcome ceremony.

P18.6. Honoring the volunteers of the C3 activity

On 30 January 2020 the pupils volunteers of the C3 activity “Greek cultural and linguistic heritage knowledge related with Easter to know similarities and differences with other partners’ heritage” were honored with volunteer awards. 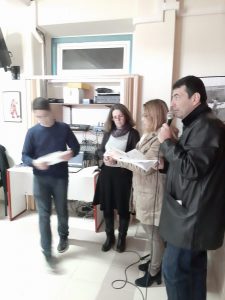 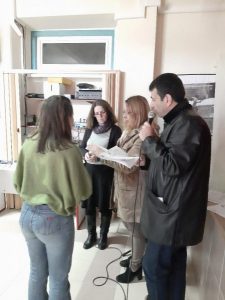