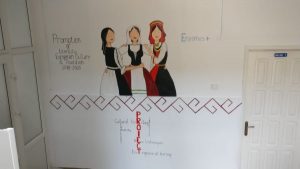 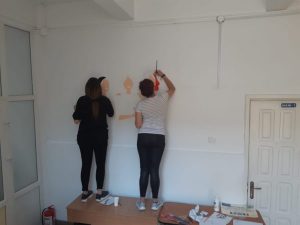 On this occasion the students had the opportunity to get familiar with the Maramuresan architectural style of the church. The characteristic of this style is the fact that the main material used is wood. It appeared during the time when Transylvania was under Austro-Hungarian influence. They forbade the construction of Orthodox churches made of stone, and even destroyed some of those made of wood on the pretext of using the space for other purposes, in order to spread Greco-Catholicism. Yet, the Romanians adapted and came up with something completely new: The Maramuresan Architectural Style. What makes this style completely special is its unique ability of making solid structures become “portable”, such as this marvelous church. In essence, this style is based on attaching wooden beams by filling each other`s gaps, that way, allowing the structure to be attached and reattached anywhere in the world.

We also visited the underground funeral chapel, a mourning place for the people, yet a delight for the local architecture. It has been built in the Byzantine style, the structure having its walls and sustaining pillars made of bricks and a marvelous marble floor, being a place worthy of admiration.

The students also had the chance to see a traditional peasant house (where they admired a loom, various folk costumes, tools and pitchers, some of them being rarely pieces dating from the 1800`s) and a sheepfold (where women used to sleep and cook while the men were guarding the sheep outside), both reattached in the yard of the church thanks to the Maramuresan innovation and the inspiration of Father Nicolae, a meticulous observer of the life and customs characteristic of the “momarlani” communities.

We found the tour offered to us by Father Nicolae fascinating, because he offered us an insight into how people used to work, cook and live in the past, all those things reminding us of how beautiful the Romanian culture is. So, if you want to find out more about any of those thrilling topics, you should really consider visiting this astonishing place, a thing we are all looking forward to doing it again as soon as possible! 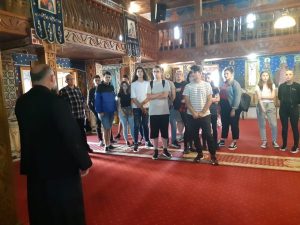 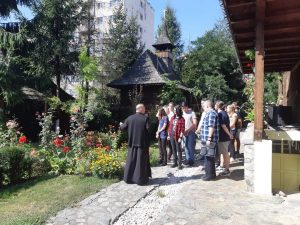 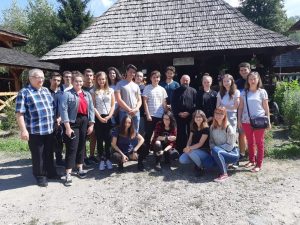 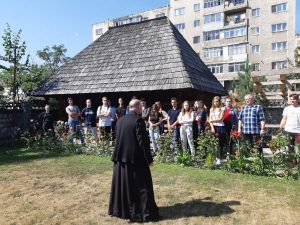 On Tuesday, 3 September 2019, 3 students from “Mihai Eminescu” National College together with Mrs. Stefania Manea, coordinator of the Erasmus+ Project “Promotion Of Identity, European Culture and Tradition” (ref. no. 2018-1-IT02-KA229-047925_3) and Mr. Roland Szedlacsek, responsible for dissemination and IT activities, visited Mrs. Vasie Buta, 73 years old, from Dalja Mica, Petrosani, who has been making traditional costumes and bags (called “straite”) since she was 13. In the Jiu Valley, there are very few women who make and sell traditional costumes and bags and she is one of them.

During the visit, they had the occasion to admire her collection of costumes and “straite”, to listen to her life stories and learn how to weave. The traditional bags and costumes are real pieces of art as we found out that women work even one year at a costume and one month at a bag. Of course, these traditional pieces aren’t simple as each woman who makes them has her own traditional symbols and motifs which make them special. In the past, women were very proud to wear those pieces as they made them feel rich and beautiful. Nowadays, the costumes are worn only on special occasions (e.g. pastoral festivals, Christmas etc.). However, you often see old ladies carrying “straite” instead of handbags when going shopping in the villages from the Jiu Valley.

The visit was a great experience because two of the students had the chance to wear a traditional costume which was made over 50 years ago by Mrs. Vasie herself. Also, we saw the traditional house where she lives with her husband and we learned that in the past, the houses were made of wood which offers them comfort and safety. We were speechless when the woman showed us her photos, described us every photo in detail and when they were taken.

Her regret is that nobody from her family wants to continue her tradition even if her daughter, Mrs. Maria Necsi, knows how to weave and sew. It was interesting to find out what life was like back then and this visit made us appreciate more the values of our area. 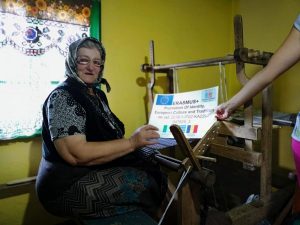 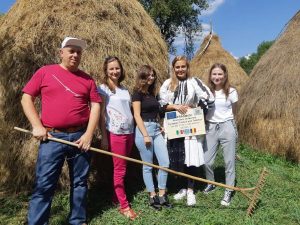 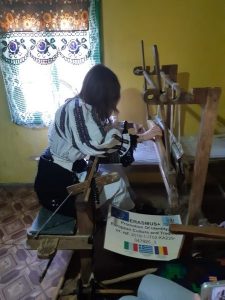 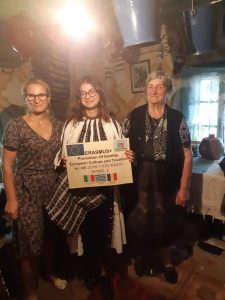 On Sunday, 8 September 2019, 6 students from “Mihai Eminescu” National College along with Mrs. Stefania Manea, coordinator of the Erasmus+ Project “Promotion Of Identity, European Culture and Tradition”, ref. no. 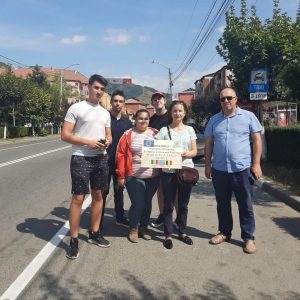 2018-1-IT02-KA229-047925_3, and Mr. Roland Szedlacsek, responsible for dissemination and IT activities, attended the international festival “Momârlanii, gazde bune” (6th edition) organised by “Junii Petrileni” Cultural Association, coordinator Mr. Constantin Cigmaian, in partnership with the Culture and Art Centre of Hunedoara County and with the support of the Town Hall and Local Council of Petrila.

On this occasion the students saw folk groups from Romania and Bulgaria, listened to specific s

ongs from each country and admired their folk costumes in a parade aimed at promoting the local traditions and supporting the young talents from each region. After the parade, each folk group performed on the stage, giving their best to win the festival trophy. 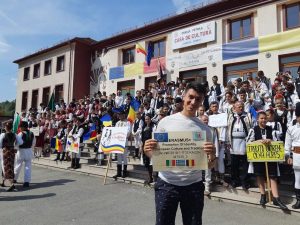 On 11 September, 2019, the students from the target group met with Mrs. Stefania Manea, coordinator of the project to discuss about the souvenirs. The coordinator set the date of 23 September 2019  as the deadline for handing in the handmade souvenirs (bracelets and bookmarks). 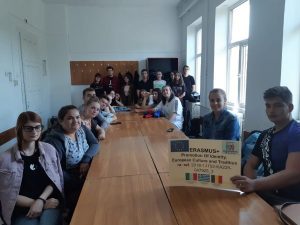 On 23 September the students brought the bracelets and bookmarks. 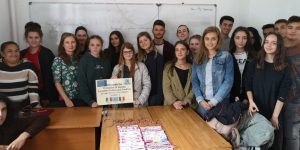 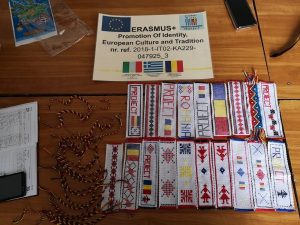 Two students, Lavinia Popescu and Giorgiana Pitec, collected information about the traditional folk costume and the traditional objects from the Jiu Valley and translated into English. They also started to work on a power point presentation that will be presented during C3 activities to give the students the possibility to learn about our customs and traditions.The information and the presentation will be posted on Twinspace (https://twinspace.etwinning.net/77604/materials/files).