On July 17, 2019, the pupils of the Erasmus+ project of our school and Ms. Maria Mangana attended the theatrical performance “Eptapyrgio – A Century in a Day 1899-1989” in the framework of the 1st Eptapyrgio Festival. A theatrical narrative of Eptapyrgio, a place with powerful memories of many centuries, forming part of the history of Thessaloniki. Actors and musicians from the National Theatre of Northern Greece took us on a track of the history of Eptapyrio, from 1899 to 1989, through human stories with sighs, music, pains and joys, strange and tender. A journey from darkness to light. Because no matter how tall the walls are, the sky is always open…. 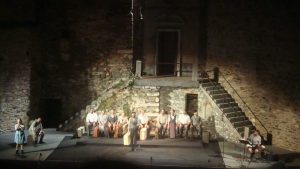