P9.1. Project information about the C2 short term exchange of groups pupils through the internet and local press

P9.2. Administration of satisfaction and self-assessment questionnaires about the C2 mobility in Greece

This is the link where you can find the file with the survey and the answers of the students of the three schools involved in the mobility in Greece:

P9.3. Educational visit at the Acropolis and the museum of Acropolis in Athens

On May 4 and 5, 2019 the A class of our school visited the Hellenic World Cultural Center and the Acropolis in Athens.

The “Hellenic Cosmos” Cultural Center is a state-of-the-art Cultural Center and Museum that stands out for its innovative programs. It is a multipurpose area where visitors experience Greek history and culture and at the same time a living cell of cultural creation. The purpose of the foundation is to preserve the historical memory and the Greek tradition, to make the ecumenical dimension of Hellenism conscious, to make its contribution to the evolution of culture, so that the past can serve as a reference point for the shaping of the present and the future and to inspire modern thought again by the Greek spirit.

“Tholos” is the new dome-shaped Virtual Reality “Theatre” of Hellenic Cosmos which hosts the digital collections of Hellenic Cosmos and it has a capacity of 132 persons. It looks like a planetarium because of the hemispherical shape of the projection surface. For the first time worldwide, stereoscopic projection across the hemispherical surface is provided. Views are interactive, viewer-controlled, not static.

During our visit to the Hellenic Cosmos, we had the opportunity to visit the Tholos and explore virtual reality in ancient Greek history. Our students traveled to Athens in the 5th century B.C. They saw in front of them all the buildings in the “Sacred Rock” in their true scale and dimensions. Using the new technologies, they admired the most architecturally complex buildings of the Acropolis, such as the Parthenon, the Erechtheion, the Temple of the Victory, the Propylaea and the statues that adorned them in their natural colors. At the same time, temples and statues, which have not survived to this day, are still alive, such as Arrephorion, the Sanctuary of Zeus, the Sanctuary of Artemis of Braunonia, the Bronze Age, the Parthenon sculpture with the golden statue of the Parthenon.

After this unique experience offered by our three-dimensional tour of the Acropolis Rock, the next day the students walked on the road leading to the Holy Rock of Acropolis and admired the Parthenon and the Erechtheion with the Caryatids. 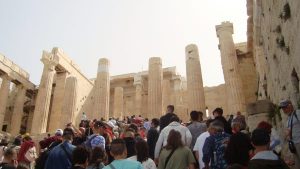 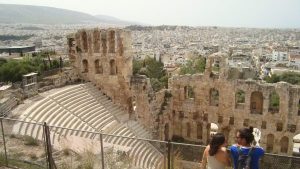 Then we visited and were guided at the Acropolis Museum. 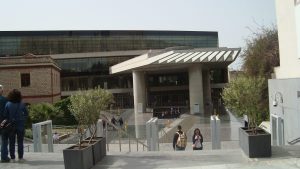 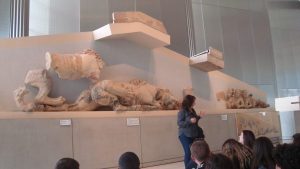 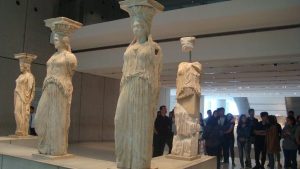 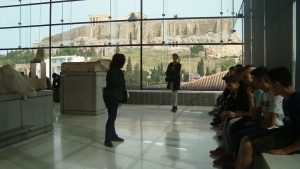 The new museum building was established in 2003 and opened to the public on June 21, 2009. On July 20, 2009, the inauguration of the Museum by the President of the Greek Republic, Mr. K. Papoulias, was held in the presence of the President of the EU and a host of foreign leaders. The then Minister of Culture, A. Samaras, in a symbolic movement spread around the world, placed a piece of marble returned from the Vatican Museum in a Parthenon metope. The move symbolized the Greek call for the reunification of the marbles at the new Acropolis Museum.

The museum is located on the southern slope of the Acropolis. Following an international competition, the first prize was awarded to the architectural office of Bernard Tsoumi and the office of Mich. Fotiadis. Tsoumi’s plan involves three conceptions: light, movement and architectural planning. The museum relies on natural light and is built around a concrete core with the exact dimensions of the Parthenon frieze. In several places, the floors inside and outside the building are transparent, allowing the view of the underlying antiquities. The museum also provides a 200-seat amphitheater, a virtual reality room, an official venue, and a periodical exhibit room.

In May 2013, the British newspaper Sunday Times ranked the Acropolis Museum at No.3 on the list of the 50 best museums in the world. In November 2010 it was voted the Best Museum of the World by a competition of the British Journalists of Tourism Editors.

During the visit to the Museum, the Parthenon Hall has a special place. It is in the form of a huge glass room that follows the proportions and orientation of the temple itself, thus diverging from the orientation of the rest of the building. The glass surfaces surrounding it provide ideal lighting for the Parthenon sculptures as well as direct visual view of the Acropolis. The original sculptures as well as the copies of those missing are exhibited in places similar to those on the temple. This creates the opportunity to reconnect all the surviving sculptures of the temple as well as a unique environment for understanding the achievements that the monument itself represents.