On 25 March 2021, the students from “Mihai Eminescu” National College, Petrosani, Romania, who are in the target group of the Erasmus + project: “Promotion Of Identity, European Culture and Tradition”, ref no. 2018-1-IT02-KA229-047925_3 (2018-2021) had an online meeting with the actors of “I. D. Sârbu” Dramatic Theatre, Petrosani, who act in “Petrosani 100” play. On this occasion, we watched together four recorded scenes from this play.

The first scene illustrates, on the one hand, the conflict between generations caused by the refusal of the grandson to continue the family tradition, and, on the other hand, the condition of a miner’s wife, who has to take care of the household and children. The main idea of the second scene is the drama experienced by each family, highlighting the possibility that the breadwinner might not return home from work one day. Also, from this scene we learn that after a possible tragedy, the miners’ widows and wives receive an easier job in the mine, to ensure the future of the children, for example as cleaners of the miners’ safety lamps. In the third scene, the focus is on the explosions and the miners’ feelings under these circumstances. Fear and insecurity take over the miners who give in to these dreadful feelings thinking that death is waiting for them. They even start to hallucinate and imagine conversations with loved ones who are no longer alive. In the fourth scene, the actors managed to present, in a special way, the miners’ revolt from 1977, when the miners fought for their rights and for a decent living. With their exceptional qualities, the actors transmitted to us the emotions and feelings that the miners experienced in those moments, especially when President Nicolae Ceausescu arrived.

After watching these touching scenes, we had the pleasure of receiving explanations from the manager of the theatre, Mr. Cosmin Radescu, and each actor who acted in each of these four scenes. They expressed the feelings felt when acting each role in this play and made us understand better the message they transmitted. We learned valuable details about each scene, details which made us understand what things were like back then. Also, apart from the actors’ explanations, a few colleagues who are part of the project had some questions for the actors.

All in all, I strongly believe that this play is worth seeing and that this meeting was for me, as well as for the other colleagues, the best we have ever had in this project so far, because we experienced the feelings that the actors brought to light and we lived with them the moments that the miners lived throughout their lives. After watching these scenes, we look forward to seeing the play in the theater hall of “I. D. Sârbu” Dramatic Theatre, Petrosani, of course, after things return to the way they were before the pandemic. 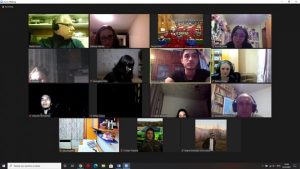 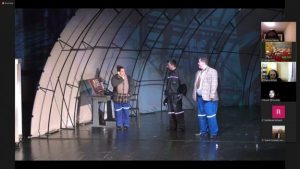