In March 2019 the Greek pupils deepened their knowledge of the traditional rites of the Holy Week and produced a relative presentation.

In addition they found information about the traditional Greek soup “Magiritsa” and produced a relative presentation.

You can find the presentations at the following URL:

Also the Greek pupils of the B’ Class visited Corfu and prepared a video about the bands in Corfu on Palm Sunday. Corfu is a Greek island which attracts a lot of tourists during the Easter period, as Easter is celebrated with a lot of traditional customs.

On 17 March 2019 the Greek teachers involved in the project organized a meeting with the hosting families, pupils and volunteers in order to inform them about the final schedule of the C2 mobility and their obligations as hosting families. We also discussed about the organization of the buffet at the welcome ceremony as well as the farewell ceremony, as all the dishes would be offered by the families. The meeting took place at the school with the presence of the President of the Association of Parents and Guardians and the Deputy Mayor of Education. 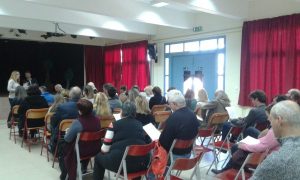 At the end of the meeting the hosting pupils and the volunteers took a T-shirt of the Erasmus+ school project. 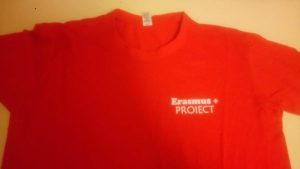 In addition, in March the pupils who were assigned the task to study one or more monuments in order to guide the Italian and Romanian pupils and teachers during the C2 mobility, prepared presentations of the monuments of Thessaloniki, Hortiatis and the Folklore Museum of Panorama. You can find the presentations at the following URL: https://twinspace.etwinning.net/77604/pages/page/484375

Also the Greek pupils, on the occasion of the C2 Mobility, prepared a photography exhibition at the school with their own photos of Hortiatis and the Monuments of Thessaloniki. The exhibition will be permanent at the main hall of the school.

P6.3. The project’s logo competition and the banners of the project

According to the competition, the Romanian logo was the winner and the official logo of our project.

After the selection of the project’s logo, we printed two banners for our project and put them at the central entrance of the school as a dissemination activity. 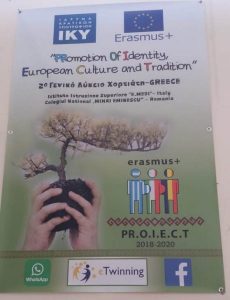 On 14 March 2019 the Greek pupils of the B’ Class watched at school the theatrical performance “BAL you…!!!”.

The performance “BAL you…!!!” presents snapshots of a teenager’s life and contact with his parents. Through his relationship with technology we see a world being created, his own. How much do parents understand this world? What misunderstandings or conflicts are created? Will a common language be found? Will they ever agree?

The story came alive with the particular theatrical technique of the “platform”: in a platform of 1m x 1.60m, three actors without sets, costumes, lighting, only with their body and voice created images, landscapes, worlds, with tingling rhythms and rhythms, as well as a series of vivid characters.

The Director’s, Sofia’s Paschou, note: “In “BAL You …!!!” there is the eternal battle between child and parent. Two opposing worlds try to understand, co-exist. A teenager learns, grows, lives in the world of his room, the world of technology, his own world, while his parents try to find a “door”, a “crap” in this room in this world.”

A theatrical journey-stimulating the creative imagination of modern children who are at risk of losing the ability to create their own images as they are victims of bombardment of prefabricated and standardized products. At the end of the show, the pupils had the opportunity to revive the worlds of history or others, theirs. And all this on the magical platform!

P6.5. Workshop about the social entrepreneurship 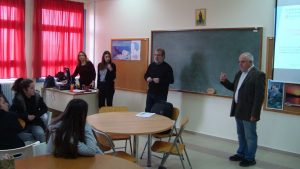 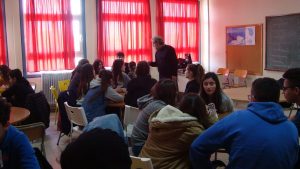 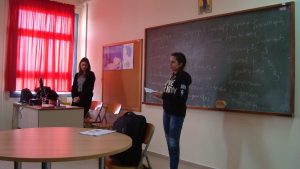 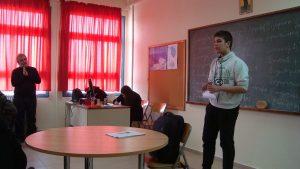 P6.6. Educational visit at the exhibition: “When the light dances, I speak fairly. Giorgos Seferis and his poetry through painting and photography “

On 29 March 2019 the Greek pupils visited the Teloglion Fine Arts Foundation which hosts an exhibition devoted to our great poet, George Seferis. The exhibition is titled: “When the light dances, I speak fairly. Giorgos Seferis and his poetry through painting and photography”. The title of the exhibition comes from a verse of his work, the “Gymnastics Notebook B”.

We had the opportunity to see manuscripts and photographs of G. Seferis, his personal objects, works and objects, which the poet himself painted, and original works by leading Greek painters inspired or inspired by his poetry.

The exhibition included the Literature Nobel prize awarded to him in 1963, but also works and objects such as pumpkins, pebbles, a wooden cabinet and others which the poet has painted.

The black and white photographs taken by Seferis during his student years in Paris until his last journeys in Greece and abroad were very impressive. The main characteristic of all the photographs was the directorial care of the poet to the posture and positioning of the faces towards the lens and the absence of spontaneity.

At the same time, we admired the works of great Greek artists inspired by the poetry of Seferis, such as S. Vassiliou, N. Hadjikyriakou-Ghika, G. Tsarouchis and many others.

Our students had the opportunity, through the exhibition, to learn not only the work and personality of this great poet but also to make a cultural journey to the past of our country. They realized the national identity of the poet’s works of art, but also their relationship with European culture and the universal human values they ​​ contain.

As a culmination of the visit, our students had the opportunity to participate in an educational workshop. Listening to Seferis’ famous poems, they tried to create their own poems inspired by the lyrics of our national poet. The result was of particular interest and he enthralled our students who turned into small poets with artistic claims. 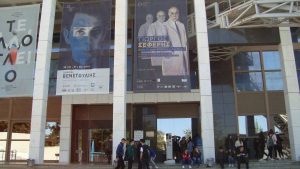 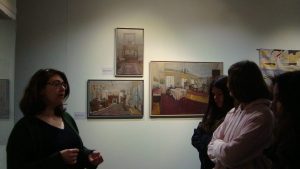 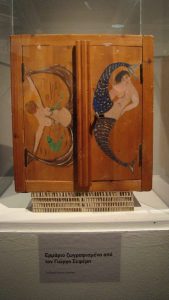 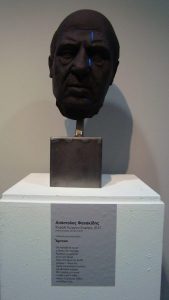 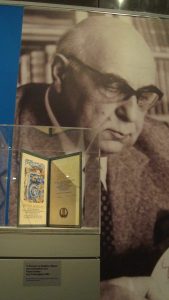 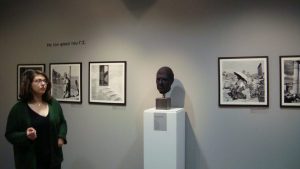 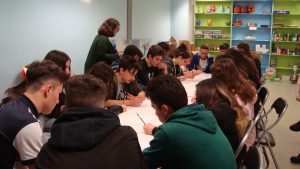