In February 2019 the Greek pupils attended cultural events of the local carnival traditions and produced a relative video.

On the Sunday before the Clean Monday men, women and children dress up in uniforms and masks and go out to the streets dancing and singing. Especially in Soho, a village very close to Thessaloniki, the residents wear bells around their waist and, as it is believed, the noise of the bells is driving the evil away. The custom comes from ancient times. In many villages on the same day, a traditional wedding is performed, with all the customs that accompany it.

On 24 February 2019 in Thessaloniki, at the 5th European Encoding Festival, bands from every corner of Greece and from many European countries took part with more than 1.500 people. With impressive uniforms, dyed faces and huge bells, the participants danced and sang to revive the customs of their regions. The teams walked from the White Tower to the port of Thessaloniki.

You can find more information about the festival at the following URL:

P7.2. Educational visit to a buffalo farm at lake Kerkini

The Greek pupils of A’ Class visited a buffalo farm in the area of ​​Lake Kerkini, Serres. We have chosen to visit a buffalo farm because buffalo breeding is an important sector of preserving the local resources, taking into account that buffalos are threatened with extinction. In addition buffalos grazing around lake Kerkini is a favorite sight for the tourists. Buffalo products, such as buffalo milk, ice-cream, “kazandipi” and “bougatsa” traditional sweets, cheese, pasta and meat are of great taste and nutritional value and are typical traditional dishes of the restaurants, enhancing the gastronomic tourism of the area.

As for the history, according to the prevailing view, the Greek buffalo (Bubalus bubalis) has been imported from Asia. The first appearance of large populations of buffalos in Greece is placed in the 13th century. In 1952 only 71.000 buffaloes were bred in Macedonia and Thrace. In 2004, their number dropped to 1.012, while nowadays, around 3,200 waterbuffalos are bred mainly in Northern, Central and Western Greece. However, 80% of the total population, about 2.500 animals, is concentrated in the area of Serres.

On the world map, Asia is the first in buffalo breeding with about 161 million water buffalos out of a total of 172 million (96% of the world’s population). In Europe, the breeding of this animal is limited to a few countries, with Italy, Greece, Romania and Bulgaria having the most significant production, and a few hundreds of water buffalos are also found in England, Germany, the Netherlands and Hungary.

The Livestock Association of Greek Buffalo Breeders, the only one in the country, was founded in 2004 with the aim of genetically improving and promoting the Greek buffalo. Nowadays, domestic buffalobreeding is only a small part of the livestock industry. However, in recent years, it has been gaining ever more ground and recognition, thus preserving the identity of the Greek waterbuffalo, which was in danger of extinction. Greek buffalo breeders firmly believe in the multiple benefits of buffalo breeding. The products of buffalo (milk and meat) are much in request inside and outside the Greek borders due to their high nutritional value, offering a satisfactory income to the breeders. 100 grams buffalo meat has only 130 calories, when the corresponding quantity of beef has 260-300 calories, lamb 241 and turkey 323, while its iron is at 2-3% when the calf reaches only 0.3%. As for buffalo milk, it contains 58% more calcium and 40% more proteins than cow’s and goat’s. Buffalo milk has beneficial effects on the body, while it is suitable for those who have allergies, psoriasis, eczema or lactose intolerance. It is recommended as a food for the weak or the patients. It contains less water, more total solids, fat and protein and a little more lactose than cow’s milk. It has lower levels of cholesterol and higher calcium, higher iron, phosphorus, vitamin A and protein. Its antioxidant action is greater than other types of milk and contains more vitamins, such as thiamine, riboflavin and B12.

The owner of the buffalo farm we have visited and member of the Livestock Association of Greek Buffalo Breeders, Andreadis Andreas, pointed out that the sector of buffalobreeding remains dynamic with huge prospects – especially in the areas of processing and marketing of buffalo products that are still in the embryonic stage – but if its viability is not ensured, then it will again be shrunk. The main black spots of the buffalo industry and the threats to the future of the sector are, inadequate pastures, the lack of arable land for animal feed and the considerable delay in paying aid to indigenous animal breeders.

The cost of farming is large and up to 850 euro per animal until the production process begins, mainly because of the feed, corn and clover. The Greek buffalo is subsidized with amounts ranging between 170 and 315 euros per animal to maintain it and its 30% annual increase, so thanks to these funds the investment costs are reduced for a new entrant in the area. The oldest breeders, have the potential to carry out infrastructure projects in order to exploit their products. However, a thorn is the fact that there are long delays in the payment of subsidies.

The number of buffalos is relatively easy to grow, he explained, adding “as long as space allows.” And that’s where the biggest problem of buffalo-breeders is. The issue of land reclamation, in order to give land to landless people, deprives the natural environment of the buffalos in lakes and, of course, their grazing. Buffalo owners in Lake Kerkini are forced to grow corn and straw to feed the animals, which increases operating costs and significantly reduces profits. Another problem faced by buffalobreeders is that of stables.

As Mr.Andreadis told us, “when one buys the herd, the animals should be one year old. In the next year they will mate and give birth. They produce milk for five months. The amounts per female are 40 to 50 kilos. The price of milk ranges from 1.20-1.30 euros/Kg. In the second year it can also be slaughtered. Each animal draws around 200-230 Kg of meat. Its price is close to 4.5 euros/kg. And at the age of one year the buffalo can be slaughtered and the meat will be at 120 Kg” he explained. He pointed out that “approximately, the farmer could have a 20.000 euros income in the second year.”

He also emphasized that the first thing one must secure in order to breed buffalos, is to find a place to manage them, that is to say wetlands, swampy places, and added, “He can start with a small flock, for example, with 20 animals. Each animal costs 700 euros”. However, he pointed out to us that “if someone opens a shop for selling, for example, traditional “bougatsa” and ice cream with buffalo milk, he will have more profit”. Speaking about his plans, he was confident that his goal was to create a dairy. 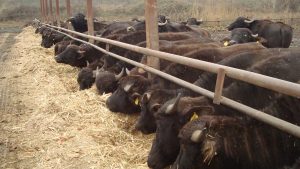 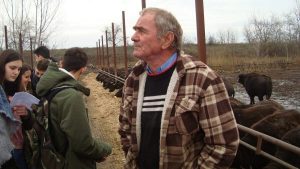 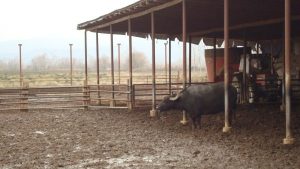 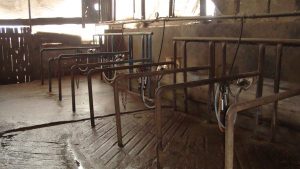 In February 2019 the teachers and pupils of the three schools involved in the project decided the final association of the hosting and hosted pupils for the mobility in Greece, after the first on-line meetings at the Twinspace platform in January and after the creation of a team at “What’s up” social network for the purpose of knowing each other. We decided that the final number of the Italian pupils that would participate in the C2 mobility to Greece would be twenty (20), seven (7) more than the number of the Italian pupils of the project’s contract, provided that seven (7) more Greek pupils would be hosted by the Italian pupils during C1 mobility in Italy. This was proposed by the Italian colleagues as there was a great request of the Italian pupils to participate in the C2 mobility and also the Greeks pupils agreed to that proposal with great enthusiasm.

Also the teachers of the three schools involved in the project decided that the final dates for the mobility in Greece would be from 6 to 15 April 2019, totally ten (10) days of activities, three (3) days more than the number of the activity days of the project’s contract. This was proposed by the Italian colleagues in order the schedule of activities to correspond with the air flight dates of the Italian group.

Then the Greek teachers organized the final schedule of activities “C2 – Greek cultural and linguistic heritage knowledge related with Easter to know similarities and differences with other partners’ heritage”. You can find the schedule at the following URL: https://twinspace.etwinning.net/77604/pages/page/484375

In order to finalize the cultural routes of the guided sightseeing at the monuments in Thessaloniki that was scheduled during the C2 mobility, and taking into account that the guides would be the Greek pupils, we visited the No50 Cultural Route Bus of the Urban Transportation.

Then the Greek pupils were assigned the task to study one or more monuments and prepare a relative presentation in order to guide the Italian and Romanian pupils and teachers during the C2 mobility.

In February 2019 the Greek pupils designed a logo for our project, in order to take part in the “logo competition” of the three participating schools. 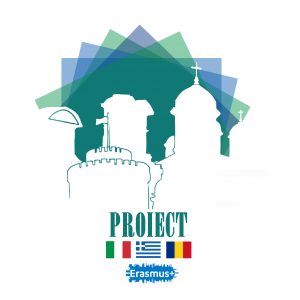 In the Greek logo characteristic cultural monuments of the three counties, Greece-Thessaloniki, Italy-Leonforte and Romania-Petrosani are depicted.